Ponderosa Pine (PP) is one of North America's most abundant species. It is often milled and sold in combination with other similar Western Pine species (Sugar Pine, Lodgepole Pine, White Pine's, Engelmann Spruce and other western white softwoods). PP is contains less pitch that Eastern Long Leaf Pine's or Southern Yellow Pine.
PP has little heart wood and is mainly sapwood, although in lower grades the heartwood becomes more common. PP is often used for interior and exterior applications. Such as paneling, trim, flooring, doors, windows, fascia, soffits and many more.

Get A Free Pine Quote

Characteristics and best uses: Ponderosa Pine has a minimal amount of of reddish-brown heartwood and exceptionally wide sapwood which is honey-toned or straw-like in color. It has a straight, uniform grain which machines to a clear smooth surface. When freshly sawn or surfaced, its pleasant smell is reminiscent of the forests where it grows. Ponderosa Pine is often specified when appearance rather than strength is of primary importance. Ponderosa Pine is relatively unaffected by changes in humidity after drying, making it valuable for work that requires close-fitting joints. It has a uniform cell structure and shrinks only a moderate amount, in comparison to other softwood species. It seasons beautifully with minimal splitting, cupping or warping. Photo: above left: The matsuda Home has a beautiful kitchen that features cabinets in blue stained pine
Read more below...

Note: all pictures are meant for a general grade description.  If you want to see a more defined grade image, please let us know.  We can email you pictures and grade rules.

« Ponderosa Pine Interior Paneling : Nothing else says country living like pine paneling does. Add the natural stains of Blue stained pine, and you have character and color in the same product.

« Ponderosa Pine Tongue and Groove : Pine paneling is one of the most inexpensive yet beatiful ways to add a special touch to a room, be it on the ceiling or on the walls. If you want the extra touch of character look at our Blue Stained pine patterns

Ponderosa Pine covers approximately 27 million acres of land. Stands can be found from Canada to Mexico and from the Pacific Coast eastward to the Black Hills of South Dakota. Its growth range covers an area encompassing more than 35 percent of the total acreage of the U.S. Oregon, Washington and California account for a major share of the annual harvest. Arizona and South Dakota are also important producing areas with lesser amounts coming from Idaho, Wyoming, Montana, Utah and New Mexico. Ponderosa Pine trees average 100’ to 160’ in height, with some exceeding 180’. The trees range from 2-4’ in diameter, with the rate of growth depending upon altitude, soil, temperature and rainfall. Mature Ponderosas can be easily identified by their distinctive orange-brown bark which is arranged in large plates. The dark yellow-green needles are 5-10” long and grow in clusters of three. The cones, similar in color to the bark, are 3-6” long and 2-4” in diameter. Seeds are 5/16-3/8” long with a 3/4-1” wing. In pure, or nearly pure, stands of Ponderosa Pine there is a standing inventory of approximately 188 billion board feet of lumber; in mixed stands there are additional billions of board feet in unmeasured inventory. Most Ponderosa trees grow, mature and survive for about 125 years before they are lost to natural causes such as rot, insect damage, fires or wind throw. Occasionally, a lone specimen will survive for nearly 200 years. Their typical site is on semi-arid plateaus and slopes, often surrounded by Juniper and Sage. Ponderosa Pine forests are usually selectively harvested rather than clear cut. This method of logging removes only the overmature trees, and leaves the other trees to re-seed and mature. Selective harvesting often makes it difficult to identify a recently logged stand. The Western pines are distinct from the Southern Yellow pines which are denser and pitchier, with widely different characteristics and uses.

As with other pines, Ponderosa can be subject to blue stain if a felled tree or green lumber becomes too warm before it is dried. Blue stain does not affect strength and is admissible in some of the lower grades. It can be hidden with paint or enhanced with clear finishes depending on user preference. This is also caused by bug holes, rot decease . 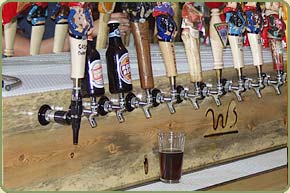 Above: This night-time shot of the Winthrop Brewery and its Blue Pine paneling. Traditional Western looks and great beer.

The Matsuda Home makes extensive use of Pine paneling in the kitchen and thoughout the rooms, creating a cozy cabin ambiance that is so characteristic of Pine.

Stability: All woods shrink and swell to some degree as their moisture content fluctuates with atmospheric conditions. However, Ponderosa is relatively unaffected by changes in humidity after drying, making it valuable for work that requires close-fitting joints. It has a uniform cell structure and shrinks only a moderate amount, in comparison to other softwood species. It seasons beautifully with minimal splitting, cupping or warping.
Workability: Easy to cut, saw, nail and glue
Link to more technical information regarding Ponderosa Pine...

Grading - Lumber Grading Rules assure users of Ponderosa Pine and other softwoods consistent standards of quality, regardless of which mill produces the lumber. Appearance Grades - Ponderosa Pine Boards are graded primarily on appearance for a multitude of applications. There are three grades of Selects and five grades of Commons (WWPA Rules) and there are also Alternate Board grades available (West Coast Lumber Inspection Bureau Rules).

All Ponderosa Pine is dried before surfacing to assure uniformity of the finished size. It is seasoned in temperature and humidity-controlled dry kilns or stacked and air-dried until the moisture content reaches the desired level--from 12 to 19 percent.